On January 15, 2017, Rick Ellis suffered a serious heart attack while riding his motorcycle and passed into the presence of the Lord. For more information please visit www.ellis.cl.

We have been ministering among the urban professionals of Concepción, Chile. Most people think of unreached people groups as being lost in the jungles of the world. In many countries, the group that has been most neglected is the upper class and professionals.  Here in Chile, they drive by scores of churches, but never stop to listen or take into account their spiritual need.  They are lost within the concrete jungles of our westernized cities.

Over the past 30 years, we have been involved in planting churches in the countries of Argentina, Paraguay, Ecuador and Chile.

We both grew up on the mission field; Rick in Latin America and Laurel in Indonesia. We met while studying in the Seattle area and both graduated from Northwest University.  Shortly after graduation we spent a year as missionary associates helping plant churches in Argentina and Paraguay. It was at that time that God confirmed His call to dedicate our lives to Latin America as church planters.

In 1984 we were approved as appointed missionaries with the Assemblies of God, immediately heading to Chile to serve with the Impact Chile task force, taking direct oversight of a church planting tent crusade in San Pedro, a suburb of Concepción. God impressed on us the need for evangelism among the professional class in Chile during our time in Concepción but this didn’t become a reality until much later.

Our following term was spent in the Andean country of Ecuador, planting the first Assemblies of God church in the province of Loja. Today there are ten churches in the province as a direct result of that evangelism effort. The church plant in Loja was primarily among professionals who had become disillusioned with the existing religion and were quite open to the gospel.  Looking back we realize that this was in preparation for the ministry we now have among this same demographic in Chile.

Since our return to Chile in 1995 we  have planted a church in the coastal city of Arauco as well as the professional class church in the heart of Concepción. The Arauco congregation responded generously to the challenge of raising half of the funds for their land and building. Today there is a thriving congregation and beautiful structure less than two blocks from the city’s central plaza.

As a church planter, Rick’s call is to begin the work from the bottom up, building the congregation to the place where they have developed leaders and are able to sustain a national pastor.  He has repeated this strategy over and over throughout his missionary career and as a result has left strong churches in various cities in South America.

At the beginning of 2014, Rick turned the church over to a young couple who had been the associate pastors at CBC for the past 6 years, Ezequiel and Nicole Gerschman.  In addition to his role as pastor and now as pastor of development of the new property, Rick also serves as presbyter of the Metropolitan Section, which consists of 20 churches in an area of over a million people. He hosts a weekly breakfast at the church for any pastors from the section who wish to attend, visits the churches for special occasions, organizes sectional rallies and bi-monthly meetings, and participates in district leadership meetings and conferences. 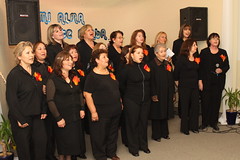 As a missionary wife with the boys now living in the States, Laurel has become more and more involved in ministry.  During this four year period Laurel has continued in leadership with the women’s ministries of the church, which has grown to more than thirty women meeting every Monday.  She sings on the worship team and is currently the church bookkeeper.

We have three sons, Devin, Daniel, and David, all born on the mission field.

Devin married Karyn in 2008 and are working in their fields of study, Karyn in psychology and counseling, Devin as a software engineer.